It is no denying fact that the vendetta between India and Pakistan has never come to halt since the inception of both countries. Both the countries have had tensions prevailing over period and again. Be it cross border terrorism, territorial dispute or any other issue, the countries have seldom come down to negotiations and the same has further led to so much of collateral damage which many of us are oblivious. One among such damage is the damage to the wild life. We often believe that the war which are fought between nations restrict to only human lives and property but we seldom notice that such war has a huge impact upon the wild life as well. And this impact counts a lot because most of these animals which breed on the borders are already at the verge of extinction. And most of them have even extinct due to the catastrophes of the war. One of such animals which hold a very cardinal role for both the nature as well as the mankind is the Snow Leopard in the border district Kargil. It can be argued that the tension between the two countries has to a great extend resulted in human-wildlife conflict in Kargil and thence threat to wildlife sustainability in the region.

Kargil, a district in the state of Jammu and Kashmir in North India is a remote, arid-cold and high altitude area. The region gained prominence to the outer world after the Kargil War which was fought in 1999. Kargil serve as the suitable habitat for many endangered wildlife species like snow leopard, Tibetan wolf (Canis lupus langier), Himalayan brown bear (Ursus arctos isabellinus), Asiatic ibex (Capra ibex), Ladakh urial (Ovis vignei vignei), musk deer (Moschus spp.), pikas, and hares (Maheshwari et al 2010). A joint study by J&K Department of Wildlife Protection and WWF reports 16 direct and indirect evidence of Snow Leopard in Kargil and Drass (Maheshwari et al 2010). Since the district lies on the line of control which demarks the territorial divide between India and Pakistan, the region has witnessed the brutal brunt of the Indo-Pak enmity. The conflict has impacted not only the lives of the people due to militarisation and cross border shelling but it also seems the conflict has not even spared the flora and fauna of the region. And predominantly it had a very bad impact upon the existence of the Snow Leapord which is known as Scion in Balti language in Kargil. Similarly, the other wildlife species are now rarely seen in the region. As Asihwarya Maheshwari of the World Wildlife Fund (WWF) points out, “it is here in Kargil that one of world’s most elusive creatures- the snow leopard, roams wild and free,”. Maheshwari adds, “during my research I have learnt about the tremendous decline in wildlife sightings, post-1999 Kargil war, so much so that even the common resident birds had disappeared”.

Uncia uncia, the Snow leopard, world’s most elusive feline, usually occurs in the mountains at elevations of 3,000 to over 5000 m (10,000 – 17,000 feet). They prefer steep, rugged terrain with cliffs, ridges, gullies, and slopes interspersed with rocky outcrops (Jackson and Hunter 1996). The total number left in the world are estimated about 4,500 – 7,500 in 12 countries of Central Asia s, viz., Afghanistan, Bhutan, China, India, Kazakhstan, Kyrgyzstan, Mongolia, Nepal, Pakistan, Russia, Tajikistan and Uzbekista (Fox 1994; Jackson and Hunter 1996). The Snow leopards are protected in nearly all countries under national and international laws. The species has been listed in Schedule I of the Wildlife Protection Act (1972) of India and is listed as endangered in the 2008 International Union for Conservation of Nature (IUCN) Red List of Threatened Species as globally "Endangered". They are listed in Appendix 1 of CITES (Convention on International Trade in Endangered Species of Wild Fauna and Flora, 1977) to check export and import of their body parts.

This is pertinent to mention here that the line of control passes through the habitat ranges of Snow Leopard and other wildlife. Hence the area is highly armed and full of military activities including military movement, firing practises etc. These activities disturb the ecological balance and thus leading to displacement of the Snow Leopard from its habitat. As a result the animal moves to the inhabited low lands in search of shelter and food for survival. During the struggle for sustainability it damages the food crops and attacks the livestock. Losing the livestock is a big economic loss for a rural family. A study on human-wildlife in Kargil and Drass reports 73 cases of livestock depredation by Snow Leopard and the total livestock loss is estimated around four million. According to the study, domestic livestock comprised 45.5% of the diet of Snow Leopard (Maheshwari et al 2010). This shows the high proportion of livestock depredation and represents the extreme of large carnivore-human conflicts in Kargil and Drass. Ironically the population which actually should protect the animal as the same symbolises the local identity to stand and survive in the harsh conditions see the animal as a threat. This makes the animal more vulnerable to extinction. Thus the India-Pakistan conflict and the aftermath militarisation and related phenomenon threaten the existence of Snow Leopard in addition to creating human-wildlife strife. In such a situation the issue of conservation and all the efforts put in by both the countries being the signatory to conventions on wildlife conservation in the region becomes a futile exercise.

Taking into account all the issues it is high time for India and Pakistan to demilitarise the line of control and make a trans-border peace park in order to save the Snow Leopard from complete extinction. The countries could learn lessons from various other precedents by places like The Åland Islands, Morokulien Peace Park, the Euro city of Haparanda-Tornio and Oulanka-Paanajärvi transboundary national park. These Nordic examples provide valuable lessons for cross-border cooperation as their experiences of the softening of borders through practical approaches, all of which could be utilized in areas along line of control, the most visible site of confrontation and hostility between India and Pakistan. In particular, it provides useful ideas to create a peace park on areas across the line of control, which is a heaven for wildlife harbouring endangered species. By doing so, it will begin a process of joint cooperation between the countries and will further ensure peace, prosperity and stability for generations to come. This will lead to the co-existence between humans and nature, promoting regional peace and stability, conserving biodiversity and stimulating socio-economic development of the region. Last to quote Dr Nelson Mandela on this cause, He says “I know of no political movement, no philosophy, and no ideology that does not agree with the peace parks concept as we see it going into fruition today. It is a concept that can be embraced by all”.

Photo credit: Aishwarya Maheshwari, WWF-India.
(The author, a native of Kargil, is Assistant Professor in Higher Education and can be mailed at 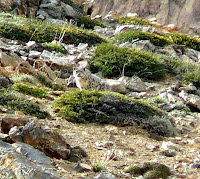 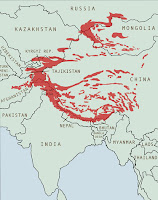 javednaqi@gmail.com)
Posted by JN at 9:09 AM No comments:

JN
Kargil, Ladakh, India
I am sinner, I am saint. I am the beloved and the Betrayed. I have no joys that are not yours, no Aches which are not yours. I too call myself I.