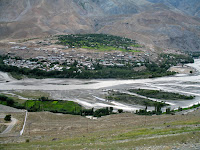 Kargil, a district in the state of Jammu and Kashmir, is carved out from Ladakh district in 1979. This was an unheard forgotten land in the Himalayan plateau. It was only during the Kargil War that the region shot into prominence. Prior to the war, the district was not even known to the rest of the country and the world at large. Although Kargil received much attention as a battlefield, the problems and issues of the local population remain unnoticed under the sheen of Kargil victory.
Kargil with an area of 14000 sq km is remote, inaccessible and high altitude area in the western Himalayas. The climatic condition of the region is harsh with extreme cold, dryness, high radiation, low humidity, low oxygen, desert landscape and limited water sources. These exert deleterious effects on the inhabitants like low fertility, high mortality, retardation of mental growth and development and alteration in physiology. Drass, a small town in the west of Kargil, is reputed to be the second coldest inhabited place, with the temperature dipping down below -45 °C. The district is home to a population of few lakhs and they carry out their day to day life under these severe environmental stresses. The baltis, purigpas, dards and brokpas form the different ethnic groups of the population. The Muslims are the majority whereas the Buddhists form the second largest population. The main occupation of the population is cultivation, horticulture, animal husbandry and into government services, trade and commerce. The district is low developed and ranks at the bottom in infrastructural facilities and overall socio-economic development. This adds to the hardship of the local population and hence the survival is on the mercy of nature.

Poor Connectivity
Gone are the days when Kargil used to be an important trade centre in the Pan-Asian trade network. With the closure of silk route and creation of India and Pakistan, the region has become totally isolated from rest of the world. Mohammad Ashraf, former Director General, J&K Tourism, points out, ‘this border area was never really cut off even during most brutal winter’. He adds, ‘Kargil-Skardu has been an all weather route of great importance, which further connects with Gilgit and thence to Central Asia’. It is only after the emergence of borders that the area got totally blocked during winter. Thus, the people of Kargil are virtually imprisoned in a frozen prison. The only link which connects Kargil to the outer world is the Zojila pass, which becomes inaccessible at least for six months in winters due to heavy snowfall and hence begins a period of isolation for the people of Kargil. This isolation results in great losses in terms of education, health, rural infrastructure development and most importantly sustainability. It badly impacts the young people’s education and growth. Tourism, crucial to its economy, is dependent on the Srinagar-Leh highway. There exists a huge potential for winter sports and winter tourism, but tourism gets badly affected due to the six-month inaccessibility. During summers, the people and the government become more involved in stocking basic amenities for the winters. Thus, energy and time are invested into it and other major development issues in different sectors get ignored. The people of the region have little choice but to consume stocked stale food items. Under such situation year after year human life in this part of the world is always at stake. For years, the people of Kargil have been demanding the opening of the Kargil-Skardu road and construction of a tunnel through the Zojila pass but so far there hasn’t been any significant development on both the demands.
The state of air connectivity is not in a good shape and still Kargil doesn’t exist on the air map of the country. The only airport in Kargil is yet to be used for commercial flights. It requires upgradation which has been pending for a long time. Due to the hilly terrain, the runway needs to be extended by 3,000 feet for normal commercial flights. The current length is merely 6,000 feet, inadequate for flight service in hilly areas.

Energy dependence
Life in Kargil is completely dependent on energy sources like fuel wood to survive the winters. Due to desert landscape and negligible forest cover, the locals are wholly dependent on Kashmir valley and across for fuelwood to sustain life during the freezing winters. The same holds true for petroleum products and other essential commodities. One can imagine the state of living conditions under shortage of these basic requirements. There are no alternate energy sources to address the crises situation. The issue of energy is of paramount importance for this region. With energy being crucial to human survival, long-term plans need to be developed to tide over the crisis-like situation that crop up year after year.

Lack of research activities and facilities
Kargil bestowed with different geology has huge mineral resources and precious rocks. The region also homes many important medicinal plants and economically important bio diversity. There is no research activity and institution in operation to explore these reserves. It is imperative to establish research facilities to undertake studies to explore the hidden reserves for the economic upliftment of the region. Such facilities will also provide prospects of employment for the local skilled and unskilled youths.

No access to external market
The district produces world’s best apricot and indigenous fruit varieties. There is no access to external markets for these fruit crops. This adds to the economic backwardness of the district as compared to the other districts of the state. In view of this state of affairs, it is highly essential to create avenues to market the indigenous fruits in national and international markets so that the socio-economic conditions of the district are improved. It will not only play a significant role in improving the state of the local economy but also help in providing livelihood sources to a large number of educated youth.

Inadequate Electricity
The state of electricity in far flung villages is very poor with mere 3-4 hrs of supply in a day. The villagers have to resort to use of mostly kerosene lamps to meet their extra energy demand. This results in high recurring expenses as well as adverse affects on health. There is great potential of hydro power in the region due to good presence of springs and fast flowing glacier rivers. This can provide efficient electricity for lighting and micro-enterprises. This can have positive impact in terms of social, economic and environmental aspects which in turn can improve the living conditions of the region as a whole. The students in the villages will be able to contribute more time to studies. It’ll replace the harmful kerosene lamps that emit harmful fumes.

Poor means of communication
Today without adequate communication means the socio-economic and educational development is impossible. It has been augmented by the technological advancement in communication and the advent of internet was a landmark. Living and day to day operation is not possible without internet. In this age of internet, the region lacks proper basic communication means. Internet is out of question, the state of mobile and telephone services are miserable. The absence of private service providers makes the situation the worst. BSNL is the only one which is in operation and out of service most of the time. The low transmitting power radio station tunes for few hours in the evening and the DD station still waits for upgradation since its inception. As a result the rich cultural heritage of region remains obscure in the eyes of the outer world. The issue of communication needs a greater focus and radical improvement.

Poor Health Facilities
The district lacks the state of art medical facilities and health specialists. Most of the time, the locals have to travel to the valley and other states for health tests and major operations. There is an acute shortage of proper health infrastructure in villages. The people remain hapless in case of health emergency during the winter when the region is cut off from the rest of the country. Under these circumstances the survival of the local always remains at threat.

Poor Quality Education and Illiteracy
Youths are the agents of change. They can help bring change if only they are provided with quality education and mentor guidance. The youths of the region have great potential to be the changemakers but unfortunately they lack the platform to groom and perform. There are no career and educational counselling centres in the district to mentor the local youths. The quantity of institutes established in the sector of education has increased but there is no accountability shown on the quality. This results in increased school dropouts, migration of students to other states and illiteracy. It is high time to bring paradigm shift in the education sector to save the future.

Poor Tourism and Sports infrastructure
Kargil has a huge potential for winter sports and winter tourism. Unfortunately both these sectors are in shambles due to sheer negligence. The district lacks proper and adequate infrastructure to accommodate the visitors. We don’t see any efforts to promote and publicize Kargil tourism through print and electronic media. Kargilites are great winter sports lovers and players from the region have played and represented India at international level. Due to favourable conditions the region can host international events but it falls back on promotion and upgradation of winter sports at par with international standards. The state of affair is dismal to the extent that more recently skating players in Kargil had to contribute money to prepare an ice skating ring in Kargil town at the bank of Suru river.

The list of issues and concerns of the population is long and cannot be scribbled down on few pieces of paper. These issues need response on war footing to support the sustainability of the people in this frozen land. The socio-economic development of the region demands for radical development strategy, a strategy built on new technologies taking into consideration the natural constraints and available resources of the region. Efforts should be made to replicate successful model of development from those parts of the world with similar conditions.

(The author, a native of Kargil is Assistant Professor in Higher Education and can be mailed at javednaqi@gmail.com)
Posted by JN at 7:40 PM

JN
Kargil, Ladakh, India
I am sinner, I am saint. I am the beloved and the Betrayed. I have no joys that are not yours, no Aches which are not yours. I too call myself I.